Over the past several Sundays the preaching at Trinity Church has centered around two important questions in this post-establishment era:


Preaching on the calling of Peter, Andrew, James, and John, Trinity's Rector, Jo Barrett emphasized the radical nature of the response of those first disciples to Jesus. Surely their neighbors would have looked at them and asked with some dismay, "What are you doing?" Leaving their livelihood behind to follow Jesus must have raised some eyebrows. While coming to church on Sunday mornings is not nearly as shocking, many of our friends and neighbors might well ask, "What are you doing?" In a society in which regular participation in worship is no longer the norm, our decision to gather each Sunday for Word and Sacrament is just that - a decision - and we are called to have some clarity, although never perfect clarity, about why we make that decision.

A week earlier Dan Weir, one of Trinity's Priests Associate, preached on the story of the first disciples in the Gospel according to John. Having heard the testimony of John the Baptist, "Look, here is the Lamb of God," two of John's disciples follow Jesus. In response to his question about what they are looking for, the two ask him when he is staying. He tells them to come and see. The Greek word translated as staying occurs many times in John's account of the Gospel, most notably in Jesus' final teaching in which he speaks about abiding in his love just as Jesus abides in the Father's love (15:7). Of course those first disciples could only learn about this over time. As they came and travelled with Jesus they began to see where he really lived, in the Father's love. Sharing a story about two people who were looking for a church in a town where he served the Episcopal parish, Dan said that he had invited them to come and see - and they did and became active members of the parish.


In her sermon on this past Sunday, Jo challenged us to claim our identity as salt and light. Although many of us had understood that salt was an important preservative in the first century, few of us had thought about salt as a common form of payment and, therefore an element of business contracts and covenants. To be the salt of the earth, Jo pointed out, is to be a living sign of God's covenant with this world. To be the light of the world is to be about the work of shining the light of God's love into the darkness of this world. That light shines as we minister to others in our congregation and in the wider community.

All of us at Trinity have responded to Jesus' invitation to come and see what it means to abide in God's love. We certainly don't do that perfectly. A good deal of the time we don't remember that we are beloved children of God. But when we do remember, when our eyes are open to see what God is doing in our lives and in the world around, it is in these moments of grace that we can answer the question, "What are you doing?" with "Come and see." Come and see what it's like to live in God's love, to be salt and light for the world that God loves, to be followers of Jesus.

(Editor's note: Dan posted some reflections on the story of the first disciples on his blog, The Thin Tradition, in 2009 - Finding Jesus.)


Posted by Trinity Church of Topsfield at 12:11 PM 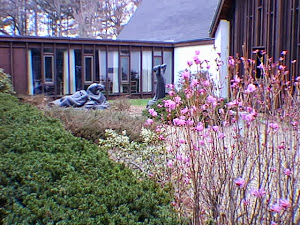 About Trinity Church of Topsfield